I grew up watching Star Trek: The Next Generation mostly because my family had one TV, no cable access, and my dad watched it. Episodes were rarely in order, a mixture of re-runs and new episodes ensured that I never followed a linear streamlined story. I do remember humans being called “Ugly bags of mostly water” once. I laugh about it now, having watched Futurama and hearing similar human-directed insults/comparisons of “flesh-wads” and “Skin tubes”. So of course when a paper came out with one of humans earliest ancestors and the headlines called it a “bag-like marine creature” I had to giggle a little. After that, I had to have a look for myself and read more. (I provided the abstract below my post.) 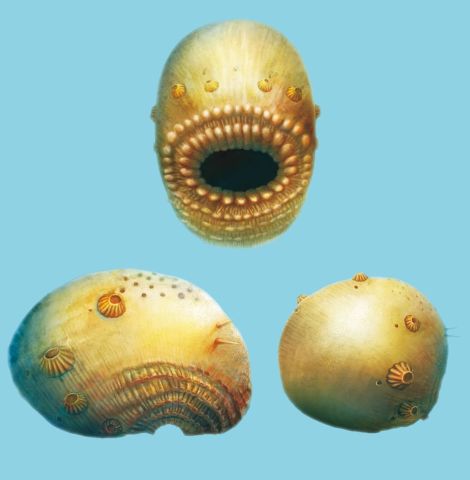 Well to be honest, the reconstructions do make it look like bag and since there is no anus, the marine water flows in the mouth and possibly out through one of the holes on the top or sides… making it an “Ugly bag of mostly water”. So why do we care about this? Well as mentioned, this is likely one of our oldest known ancestors. It is extremely tiny and belongs to the group deuterostomes, which is the group that all vertebrates belong to and evolved from. This specific critter lived roughly 540 million years ago which is roughly 20-30 million years older than previously researched deuterostomes. What I find perplexing was that I thought in deuterostomes, the first opening became the anus, not a mouth. The researchers didn’t find any evidence of an anus, so I would have thought this would have been classified into protostomes. Protostomes are creatures where the “first opening” to form become the mouth. Perhaps there were embryonic  Saccorhytus coronaries studied as well that tell a different story?

What do you think? Is this what you thought all vertebrates evolved from?

Well it doesn’t really matter what we may like to believe, in all honesty. The facts are the facts and this little critter fills a (tiny but important) evolutionary gap, adding to our knowledge. Evolution goes much further back than just “apes”, all life on Earth has one origin….. a scary thought and yet a very enlightening one.

What I do fear, is the ignorance of others when it comes to new evidence. When even the Pope accepts evolution, anthropogenic climate change, and the “Big Bang” yet his followers do not? It is a bit of a backwards world. I do hope that scientists keep pushing forwards and making new discoveries despite the politics. I do hope that researchers will be able to continue to work with each other to collaborate cross-borders. I hope “alternative facts” gets wiped from existence and science is embraced as it should be.

<End of my Thursday Thoughts>

Meiofaunal deuterostomes from the basal Cambrian of Shaanxi (China)

Deuterostomes include the group we belong to (vertebrates) as well as an array of disparate forms that include echinoderms, hemichordates and more problematic groups such as vetulicolians and vetulocystids. The Cambrian fossil record is well-populated with representative examples, but possible intermediates are controversial and the nature of the original deuterostome remains idealized. Here we report millimetric fossils, Saccorhytus coronarius nov. gen., nov. sp., from an Orsten-like Lagerstätte from the earliest Cambrian period of South China, which stratigraphically are amongst the earliest of deuterostomes. The bag-like body bears a prominent mouth and associated folds, and behind them up to four conical openings on either side of the body as well as possible sensory structures. An anus may have been absent, and correspondingly the lateral openings probably served to expel water and waste material. This new form has similarities to both the vetulicolians and vetulocystids and collectively these findings suggest that a key step in deuterostome evolution was the development of lateral openings that subsequently were co-opted as pharyngeal gills. Depending on its exact phylogenetic position, the meiofaunal habit of Saccorhytus may help to explain the major gap between divergence times seen in the fossil record and estimates based on molecular clocks.